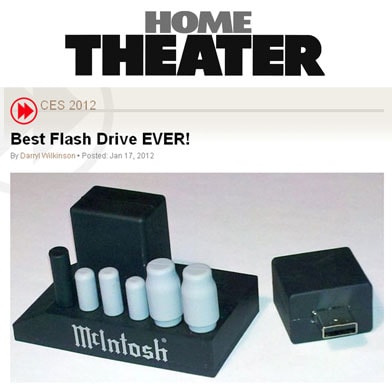 At CES, legendary audio company McIntosh introduced a special 50th Anniversary Limited Edition McIntosh MC275 tube power amplifier. According to McIntosh, the 75-watt x 2 MC275 was designed and engineered in 1961 by McIntosh co-founder Sidney Corderman and the McIntosh Engineering Team, and it's been an object of desire for McIntosh aficionados ever since. Adding to the excitement of the introduction, McIntosh handed out what has to be one of the best press kit flash drives in the history of CES: a miniature version of the MC275 with 4 GB of flash memory hidden inside one of the output transformers. McIntosh says they are only building 275 of the 50th Anniversary Limited Edition MC275 (hmmm, I wonder where they came up with that number?), so it's destined to be a highly sought after piece of gear. I'm not sure how many mini-MC275 flash drives McIntosh has to give out, but I know it's going to be quite a collector's item, too. Now, if I could just figure out where to connect the speaker wires...