AUDIO ESOTERICA: McINTOSH MC452 AND C2500 "AMONGST THE BEST WE'VE HAD" 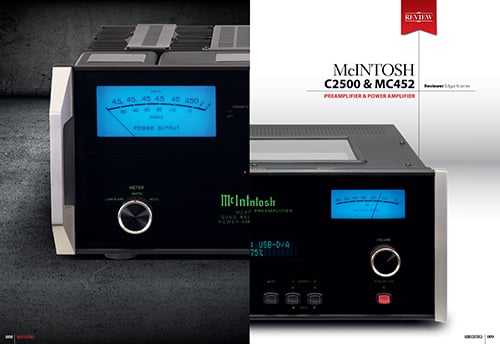 Audio Esoterica is a guide to the ultimate hi-fi and home entertainment equipment. Published just once a year, only the very best high-end components are featured. We are honored to have the MC452 amplifier grace the cover of its 2015 issue and be featured with the C2500 preamplifier.

Reviewer Edgar Kramer noted "the combo displayed a solidity to the sound picture that was a treat straight off" with a soundstage presentation that was "enormous in all perspectives." This produced a sense of scale that "places this pre/power combo amongst the best we’ve had in-house." "Detailed, tight and powerful low frequencies fortifying the foundation to the musical experience" were produced on his Wilson Audio Alexias, while the highs were as good as "any other excellent amplification technology... cymbals and bells decayed beautifully in an ‘airy’ ambience." A glorious midrange brought a strong vocal presence; from Musica Nuda’s Petra Magoni’s "delicately subtle vocal passages through to her soaring-high lashings the McIntosh team kept composure, never straining or brash."

No matter the source - which ranged from CDs to an FM tuner to AIFF files from a Macbook via Bit Perfect fed straight into the C2500’s "rather superb" built-in DAC - "all replayed in a most balanced and natural way," allowing the music to be felt both emotionally and physically as the artist intended. "The McIntosh C2500 and MC452 excel at spectacular dynamic expression, beautiful and accurate tonality, satisfying detail retrieval, and the recreation of a generous sound field."