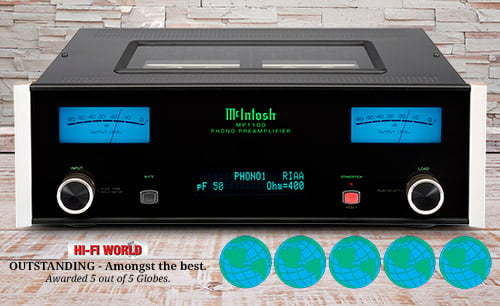 Noel Keywood of Hi-Fi World says he dreams about phono stages but he's never had a dream like this. The McIntosh MP1100 "is quite unlike anything that would pop into my head in the middle of the night, but McIntosh does a lot of things differently – and also very well. Their new MP1100 phono stage... is both fascinating and impressive."

Noting the benefits of using a turntable in balanced mode, Keywood is glad "that at last a mainstream manufacturer bothers to do this on a serious phono stage." Listening to Mark Knoplfler's True Love Will Never Fade, the MP1100 revealed "a nicely involving resolution of instrumental and vocal textures, rather than the hard, bleached quality common to unbalanced" phono preamps. "This is a phono stage with good projection... bass was both tight and clean." On Mozart's Symphony No25, the violins jumped from the speakers giving "a strong sense of animation from the instruments and the musicians... Curious to explain that a phono stage can bring life to a performance, but there it is." Keywood concludes that in essence, the MP1100 "is a phono stage that has it all." Awarded 5 out of 5 Globes.